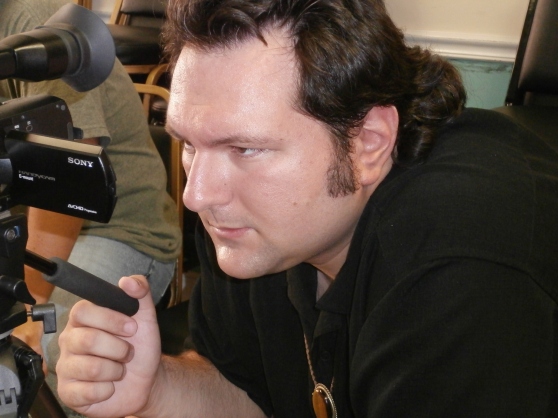 Espocinema.com is the official website for Independent Filmmaker Adrian Esposito.

The trailer is online at https://youtu.be/POihqoudIdE

Written and directed by Adrian Esposito (GREETINGS FROM TROMAVILLE, DIFFABILITY HOLLYWOOD) and Curt Markham (SABERFROG, THE SEARCH FOR SILVERSPEAR) the film is a significant example of outsider cinema, with some featured parts played by actors with disabilities. Esposito himself has autism, and is an advocate for people with disabilities to have roles as actors and behind the camera.

CLOWNS IN THE WOODS tells the story of Marcus (Dalton Letta), a young man with a disability, who is bullied and killed after a prank goes wrong. In the afterlife, he meets a group of ghostly clowns who help him exact revenge on those who have wronged him. One of Marcus’ few friends in life was his neighbor Amy (Roselyn Kasmire), a lesbian college student with a big heart. As the deaths pile up, Amy is determined to learn the deadly secret behind the recent wave of murders, not realizing that she may be putting herself and her loved ones in danger.

Directors Adrian Esposito and Curt Markham have been fans of horror films since a young age, especially independent regional horror films. They wanted to create a horror movie inspired by the 2016 clown sightings, and to include people with disabilities in both the story and the production. CLOWNS IN THE WOODS is an independent horror movie with creepy villains, twisted kills, and a spooky small-town atmosphere. In the tradition of CANDYMAN and NIGHTMARE ON ELM STREET, the film is about sins of the past, as a younger generation must grapple with the consequences of past injustice.

With CLOWNS IN THE WOODS, the filmmakers have strived to make an entertaining story that touches on themes of inclusivity, embodied both in front of and behind the camera. “There is a common prejudice against low-budget horror movies,” says Adrian Esposito. “We want to show that there is value in horror genre storytelling, by diving into the worlds of make-believe and dark fantasy, and by showing villainous characters get their just desserts.”

CLOWNS IN THE WOODS will be screening at festivals in the next several months. Espocinema is currently fielding distribution offers, and the film is expected to make a streaming debut in early 2022.

Espocinema, LLC produces documentary and narrative features with a social message. The films focus on subjects that have faced significant challenges in life. Filmmaker Adrian Esposito has earned international recognition, including the NYSARC Self Advocate of the Year Award, the ARC National Executives NCE Lifetime Achievement Award in filmmaking, and the L. A. Red Nation Film Festival Courage Award. Past projects include Diffability Hollywood, Greetings from Tromaville, We Can Shine: From Institutions to Independence, Liberation Unit, Bury My Heart With Tonawanda, and Inner Healing: Journey with Native Trees of Knowledge.

EPK and images available for download from our Dropbox at 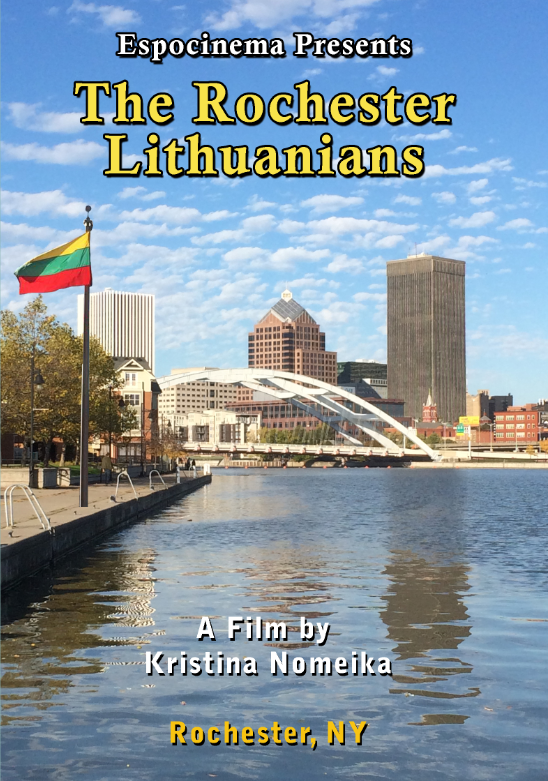 on Amazon Prime and Vimeo!

This documentary was commissioned and funded by the Lithuanian Heritage Society of Rochester, NY. The story is told by descendants of Rochester Lithuanian’s, its current members and is narrated by Ray Kirstein Jr., directed by Kristina Nomeika, a member of the Society who also grew up in this community and edited by her son, Adrian Esposito. It follows the stories of Lithuanian immigrants as they establish their community, church and businesses in Rochester, NY. The Rochester Lithuanians document their stories from their initial arrival in the 1900’s to the present day. We follow them through World War I and World War II. We hear of the experiences of the “Displaced Persons” as they fled their homeland, arrived in America and settled in Rochester, NY. The film includes footage and explanation of Lithuanian traditions and celebrations. The Director’s Cut is on Vimeo and includes biographical information about notable Rochester Lithuanian artists, musicians and leaders. The Amazon version is a thorough historical document but excludes the biographical clips. The Rochester Lithuanians is essentially the story shared by many immigrants coming to America. The film helps us appreciate the contribution that immigrants make to the diversity and fabric of America.
To obtain a physical copy of the film please contact Sue Jenkins: susanzjenkins@aol.com

Were pleased to announce that Greetings from Tromaville is now available on these streaming platforms!

We are pleased to announce that Diffability Hollywood is now available on these streaming platforms!

As of this week, all eight of Espocinema’s feature films are now available for streaming on Amazon’s Prime Video.

Aging Trees of Knowledge II: Command of Sankofa joins the other movies, free for streaming for Prime members. The documentary looks at issues of race and poverty, with a special focus on Rochester, NY. The story is told by civil rights advocate and historian Dr. David Anderson, who was instrumental in drawing attention to the effects of lead paint on children, leading to federal legislation. 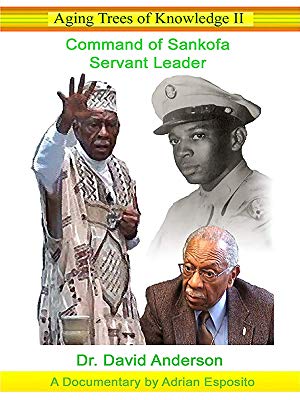 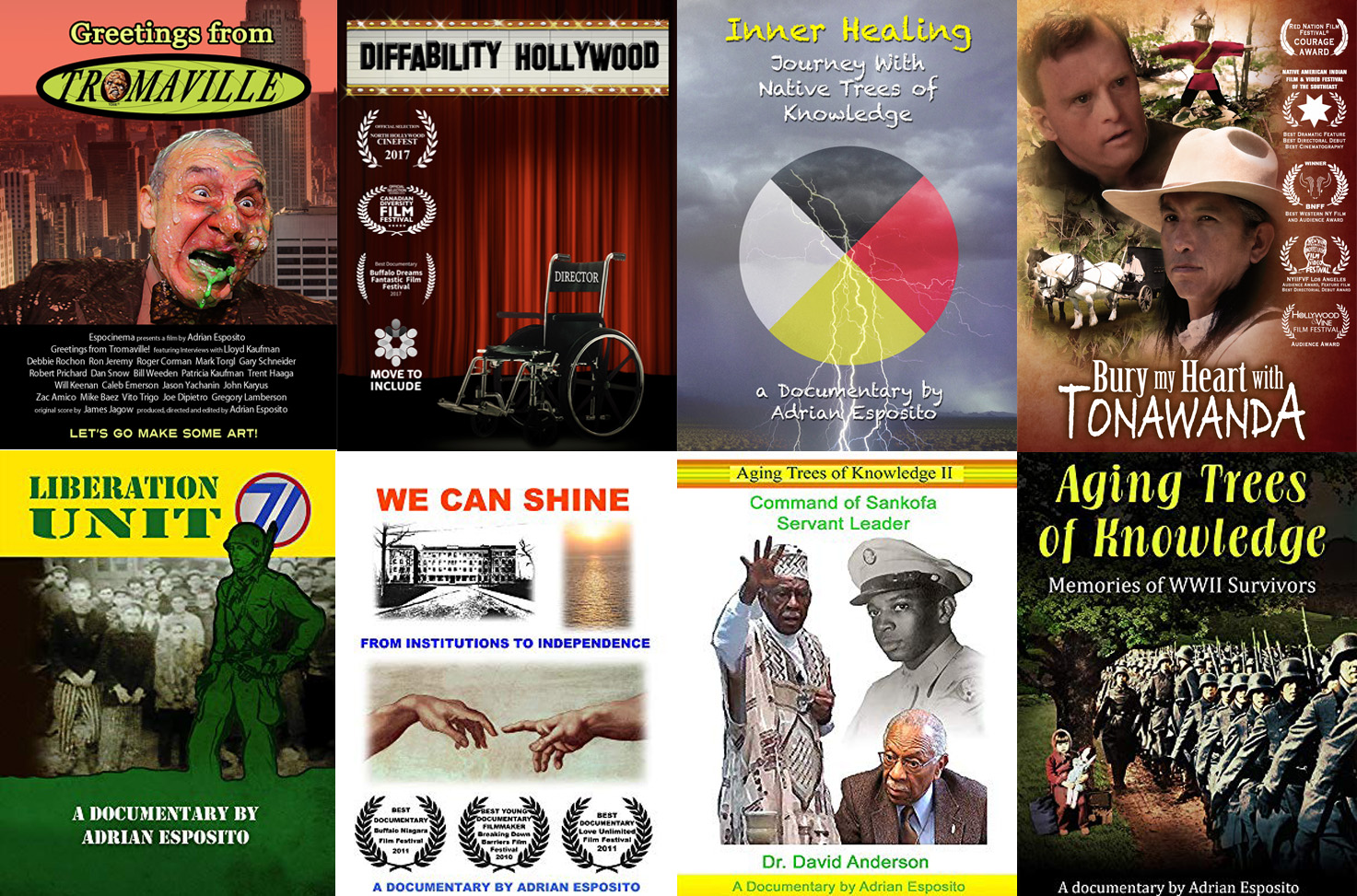