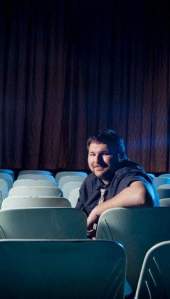 Adrian Esposito has Asperger’s syndrome, a form of autism. Yet the Brighton resident, who is only 21 years old, has created a documentary poised to grab the spotlight at the 360|365 George Eastman House Film Festival.

We Can Shine explores the grim conditions faced by developmentally disabled students in the mid-20th century, but it also demonstrates the success some of them have achieved today.

“I show how some things have changed for the better,” Esposito says. “From making We Can Shine, I realize how much people like me used to be misunderstood.”

Asperger’s syndrome affects the ability to socialize with others, though people with Asperger’s can be gifted in areas like math and music. Common symptoms include misinterpreting social cues, using highly formal speech or gestures and holding one-sided conversations.

The cause is unknown.

“Sometimes it’s hard to do impulse control,” he says, vigorously rocking his upper body — a habit he attributes, too, to Asperger’s. “It’s hard to know when to get into a conversation with a group, or when to interrupt.”

But to the people he films, he can be a dominating presence. He has a tall, stocky build and sports a neatly trimmed mustache and mutton chops. Behind his movie camera, he gains a certain confidence and authority.

Esposito was diagnosed as autistic at age 5. Much of his education has been handled by BOCES, which will graduate him in June. But he also learned a great deal from movies and videos.

“At age 7, I started getting interested in Planet of the Apes and the Outer Limits series,” he recalls. “Movies seemed very real. I could go into a fantasy world, escape to Africa or try the Nutty Professor’s drink that turns you into a different person.”

One afternoon he invented a story about a tribe of lizard people, then dictated it to his mother, Kristina Nomeika. It was the first of many homegrown movie plots she would type into her home computer.

Esposito’s imagination was stoked by countless hours at Hyatt’s Classic Video in East Rochester, and later by BOCES classes in radio and television broadcasting.

But no one expected the rapid series of documentaries that he has created in the last three years.

His first, Aging Trees of Knowledge, featured interviews with Holocaust survivors from New York City, Chicago and Rochester. It will be screened at 6:30 p.m. May 17 at Brighton Memorial Library.

Then came Command of Sankofa, which explores local storyteller David Anderson’s views on the fabled history and lingering community problems of African-American Rochester.

But his latest documentary, We Can Shine, is by far his most ambitious. Esposito examines what his life would have been like if he’d been born in 1944, when certain schools neglected or abused students with developmental disabilities.

He focuses on Willowbrook State School, a notorious Staten Island institution housing up to 6,000 developmentally disabled children. Geraldo Rivera, then a rookie reporter, went undercover to expose its horrific living conditions in 1972.

Among them are a Victor couple, Eric Neatrour and Christine Kurvits, with Down syndrome and a Fairport woman, Sarah Nettleton, who can’t speak but writes poetry.

“He ran away from home as a teenager and lived on the streets,” says Esposito. “No one thought he’d have a very good life. But he got a job, a house and met someone he loved. Now he’s working as a truck driver.”

Esposito started shooting the documentary in July 2008 and finished editing in March. His mother wrote the script, and Animatus Studio of Rochester helped with several of the shoots.

It screens at 3 p.m. next Sunday in George Eastman House’s Curtis Theatre.

“When I was going through tough times in high school, I just wanted to be in programs with ‘normal’ people,” he says. “Now I think that people with development disabilities are just like anyone else. They have their own talents. They’re just in bodies that aren’t working with them.”